The fishing is awesome right now, the weather is perfect and it’s time to go fishing. There is less than a month left in the MD 2015 Striped Bass season and Last Hurrah Charters is booking up trips for December. Fishing has been phenomenal lately with 6 to 18 simultaneous hook-ups occurring some days and steady picks of fish on others. We are boxing limits of chunky Rockfish every trip and having a lot of fun doing it. The season runs to December 20th. It’s not that cold in Maryland and the boat cabin is fully heated! So don’t wuss out or miss out and let’s go fishing in December. Here’s some recent pics of the action: 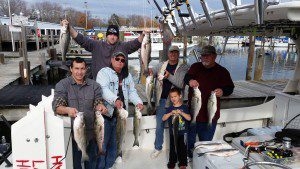 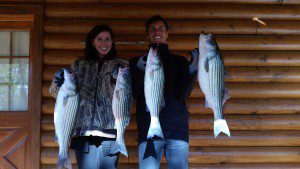 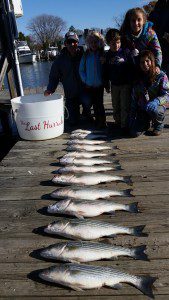 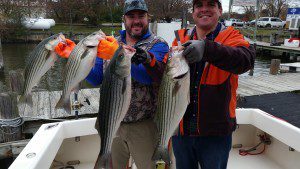 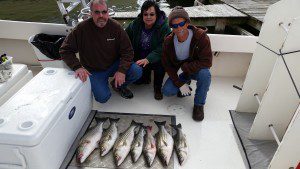 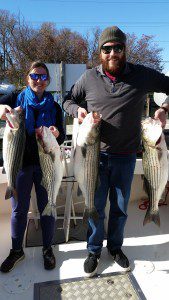 Fall fishing can be some of the best of the year, but it can take some understanding of the Chesapeake Bay’s seasonal transition or “Fall Turnover” in order to put meat in the box.

Temperature, salinity and circulation determine the basic aspects of a given body of water. Wind, rainfall, air temperature, snow melt, currents, tides, waves and even the Coriolis Effect shape these fundamentals. The term “Fall Turnover” refers to the annual phenomenon that the Chesapeake’s water layers undergo.

During the Spring and Summer months, the Bay’s surface is heated by the sun and maintains a higher temperature than that of deeper depths. The cooler, saltier water is denser and therefore sinks to the bottom during this time of year. Two distinct layers of waters stratify with a thinner zone in between them. This middle section of water is called the “pycnocline” and it is where water density increases abruptly with increasing depths due to changes in salinity and water temperature. Since the thermocline is a region of rapidly fluctuating water temperature, and the halocline marks sudden changes in salinity, it’s useful to think of these two “clines” as causing forces behind the pycnocline. The stratification of the Bay’s layers and a significant pycnocline can create barriers to nutrients mixing between layers and can void the bottom of dissolved oxygen. This is why fish are often not found very deep in some areas during the Summer.

When Fall brings cooler temperatures and an abundance of wind, the Bay is stirred like a giant mixing bowl. The fresher surface water cools the quickest and density becomes consistent throughout the water column. This causes the top layer to sink and vertical mixing to occur. As the water blends, it pushes nutrients up from the bottom and distributes oxygen deeper. During much of the winter, water salinity and temperature are relatively constant from the surface to the bottom. The turnover can happen overnight but will do so in different areas at different times depending on conditions.

So, who cares? Fish do. Striped Bass, the crown jewel of the Chesapeake, are greatly affected by this autumn changeover. With dissolved oxygen more evenly dispersed, fish may be suspended anywhere from the very bottom up to the surface of a post-turnover area. It can be more challenging to target fish scattered throughout the depths, and extremely deep fish can be reluctant to bite. However, post-turnover areas can provide large bait concentrations and schools of active, cooperative Stripers. In order to consistently catch these late-season fish, it helps to pay close attention to their environment and to have a basic comprehension of Fall Turnover.

Fishing is good and getting better.  We have dates left in Nov. and Dec.  Let’s go fishing!!

Here are some pics from the week… 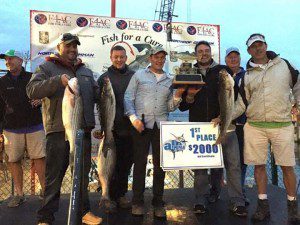 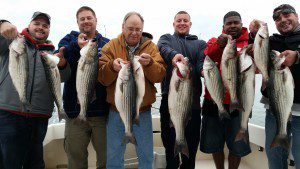 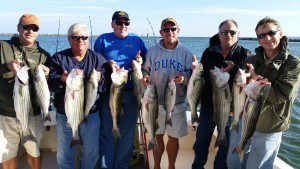 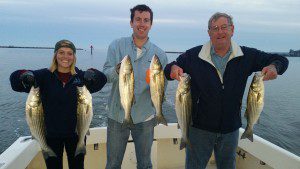 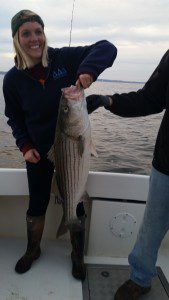 I've chartered two company trips with Captain Scott so far. We had our first trip last October, and followed up with a Spring trip last May. Both trips were great, and Captain Scott worked hard... Read More

I booked a trip with Captain Scott and his mate, Chris, this past weekend, Nov 6th, 2016 and had a great time. We caught our limits within an hour of departing the dock. I have been on enough... Read More

Capt. Scott made sure that my group had a great time while catching our limit. We have already made sure to fish with him again by prepaying and booking our Spring 2017 outting. Thank you... Read More